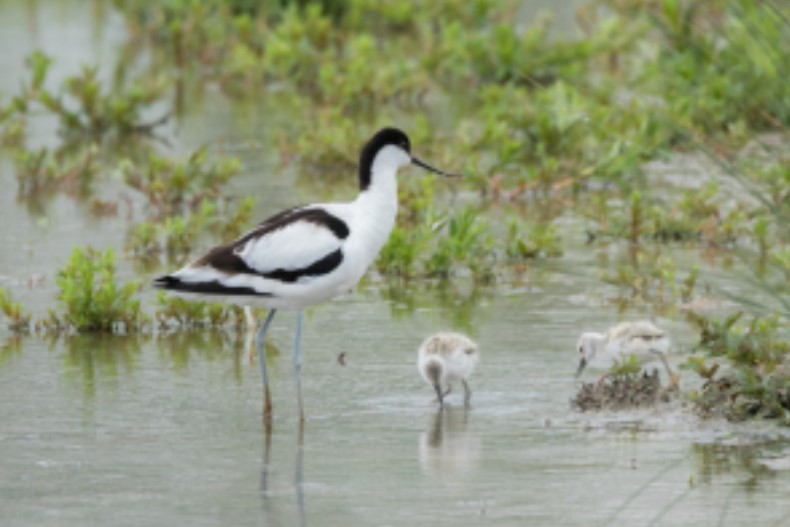 These stunning birds are such a joy to see in the summer, a symbol of wetlands! They are elegant black and white birds with long blue legs and a delicate upturned bill they flick from side to side through the water filtering out insects and small fish. At Martin Mere they breed on the Mere and on Woodend marsh but can be seen from almost every hide!

The avocets arrive in February but don’t start to nest until May. The nest is a small scrape in the ground, they love the shingle islands on the mere as their eggs are very well camouflaged. In 2006 we only had 5 pairs but the numbers have increased loads since then and this year we currently have 29 pairs either with chicks or sat on nests.

Avocets are not site faithful in their first year. They breed for the first time when they are 2 years old, they like to go travelling and have their first family away from their natal site and return the following year. Almost like they want to do some travelling before they settle down!

Avocets normally lay 4 eggs they incubate them for 24 days then the chicks take around 40 days to fledge. We’ve had our first eggs hatch this week and the parents and chicks are feeding really close to the Gordon Taylor hide and some visitors have taken very cute photos of the little bundles of fluff. The chicks can feed for themselves as soon as they’ve hatched and pick insects out of the muddy edges. The parents can be seen brooding them (keeping them warm) and warding off predators. Avocets do a broken wing display where they will pretend they have a broken wing and will lure predators away from their family fooling the predator that they are an easy meal.