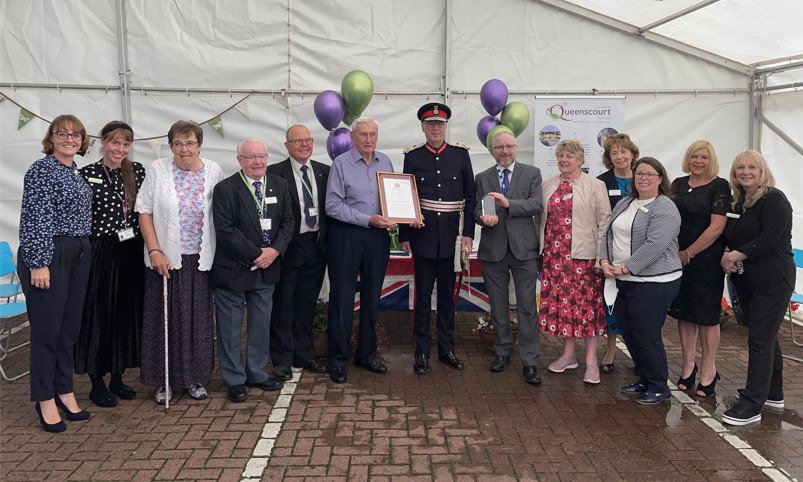 On Tuesday 17th of August, the volunteers at Queenscourt Hospice were officially presented with The Queens Award for Voluntary Service (QAVs) by representatives of Her Majesty the Queen.

Queenscourt Hospice, which is currently celebrating its Pearl Anniversary, was notified in June that the Hospice’s volunteers had been honoured with this prestigious award – the highest a voluntary group in the UK can receive. The award, which was created in 2002 to celebrate the Queen’s Golden Jubilee, recognises the outstanding work carried out by volunteer groups across the country to benefit their local communities.

The presentation of the Crystal Award and certificate was made by Her Majesty’s Lord-Lieutenant, Mr Mark FW Blundell, to Bill Witter, one of Queenscourt’s dedicated and long-serving gardening volunteers.

In his opening address Mr Blundell said, “We were absolutely delighted to attend the hospice and present Queenscourt’s Volunteers with The Queen’s Award for Voluntary Service on behalf of Her Majesty Queen Elizabeth II.

Volunteering is more important today than ever, however many volunteers give their time with little reward. Her Majesty the Queen believes their commitment to others should be recognised. I would like to congratulate all of Queenscourt’s Volunteers on their achievement.”

Bill Witter said: “It was a great honour to accept this award on behalf of Queenscourt’s volunteers, I am extremely proud of the team and how hard we have all worked. It was a fantastic day for the hospice.”

Queenscourt Hospice currently has a network of 528 volunteers, 210 of which have received their ten-year service award. In the 12 months prior to the pandemic, Queenscourt’s volunteers committed to 104,000 hours of volunteering at the hospice.

Dr Karen Groves MBE, Queenscourt’s Medical and Education Director and founder of Queenscourt said: “As we celebrate our Pearl Anniversary and 30 years of providing compassionate care, we recognise that none of this would be possible without the thousands of volunteers who have become valued members of #teamqueenscourt over the years. This is a richly deserved honour for our volunteers, past and present”