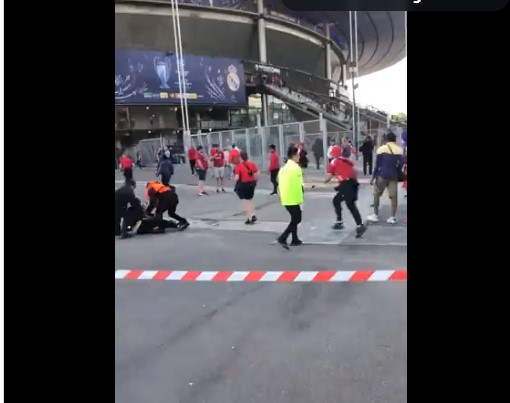 Liverpool have called for an investigation into the "unacceptable issues" faced by fans which led to their Champions League final against Real Madrid being delayed.

The match at the Stade de France in Paris did not start until 20:36 BST.

Police outside the ground fired tear gas as a small number of supporters tried to climb over security barriers.

While Merseyside Police's matchday officers tweeted that it was "the worst European match I've ever worked or experienced".

They added: "I thought the behaviour of the fans at the turnstiles was exemplary in shocking circumstances. You were not late 100%."

Pictures had emerged in the build-up of huge crowds of fans queuing to get in.

Many claimed they had been at the stadium hours before kick-off but were stopped from getting into the ground.

"We are hugely disappointed at the stadium entry issues and breakdown of the security perimeter that Liverpool fans faced this evening at Stade de France,

"This is the greatest match in European football and supporters should not have to experience the scenes we have witnessed tonight.

"We have officially requested a formal investigation into the causes of these unacceptable issues."

European football's governing body Uefa said it was "sympathetic to those affected by these events and will further review these matters urgently together with the French police and authorities, and with the French Football Federation".

"In the lead-up to the game, the turnstiles at the Liverpool end became blocked by thousands of fans who had purchased fake tickets which did not work in the turnstiles," it explained.

"This created a build-up of fans trying to get in. As a result, the kick-off was delayed by 35 minutes to allow as many fans as possible with genuine tickets to gain access.

"As numbers outside the stadium continued to build up after kick-off, the police dispersed them with tear gas and forced them away from the stadium."

As kick-off approached, large areas of empty seats could still be seen inside the ground.

Outside, some fans were seen climbing perimeter fences or attempting to run past security. Riot police were also in attendance.

Liverpool players emerged to warm up again at 20:06, with messages on the big screens inside the stadium stating the delay was because of the late arrival of fans.

French police said fans with fake tickets had tried to force access to the stadium but "the rapid intervention of the police allowed the return to calm".

They added they were able to disperse fans "without difficulty".

Small number of fans running through gates at Stade de France, security unable to stop them, lots of fans still to be allowed in #ChampionsLeague #liverpool #realmadrid pic.twitter.com/Do1cwPYlig