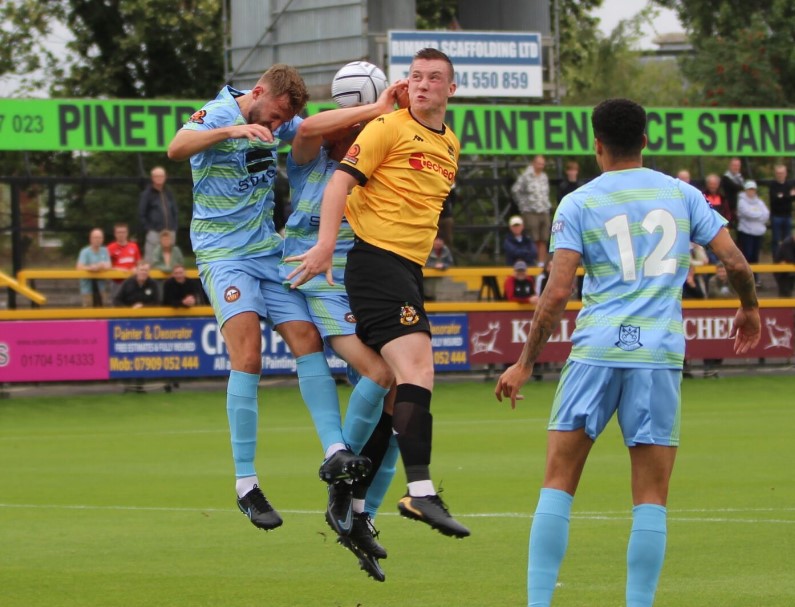 A highly entertaining afternoon of football saw Southport twice come from behind to draw 2-2 with one of the title favourites.

After a quiet opening spell it was Gloucester who took the lead in the 9th minute from a well worked set piece which deserved a goal even though it took a huge deflection to wrong foot Cam Mason in the Southport goal.

Southport came back strongly and equalised through a Marcus Carver penalty after a handball in the. Carver made no mistake from the spot confidently blasting the ball home.

Gloucester were enjoying a good spell and they retook the lead in the 28th minute through Jordan Young.

Carver and Connor Woods both had chances to restore parity in the first half but The Sandgrounders went in to the break 2-1 down.

A sparkling second half performance after a shift in formation had the very appreciative home crowd willing the home side on. Chances came and went at will but it took a superb piece of Connor Woods magic in the 68th minute to get the home side back on level terms shooting past the ‘keeper from a tight angle. From then on it was virtually one way traffic with Southport going close on numerous occasions but they just couldn’t find a way past Cole in the Gloucester goal.

In the end Southport had to settle for a draw, a result that before the game we would have probably taken but after the 90 minute display the home side were left feeling the one point could easily have been converted to three.

The Southport side left the field to a standing ovation from the home faithful who had given the side tremendous encouragement throughout the game which was acknowledged by manager Liam Watson after the match.

Missing from the line up today was new signing Isaac Buckley-Ricketts who has slight hamstring pull and was not risked this afternoon.