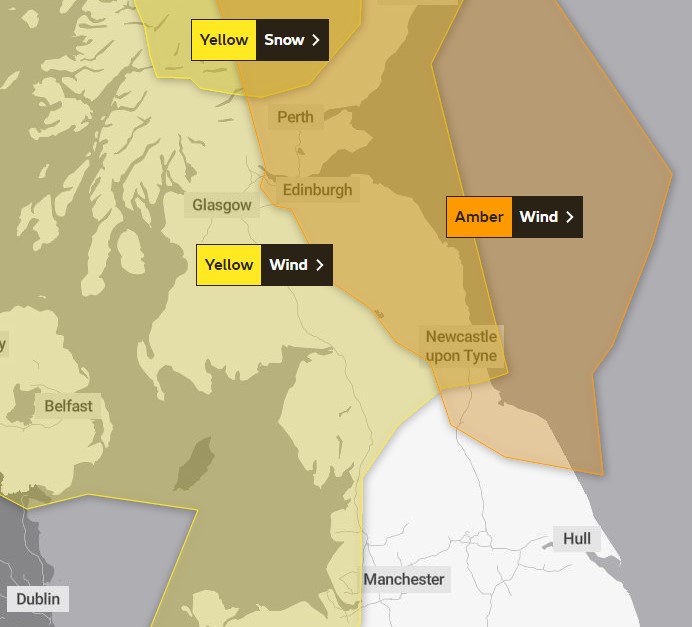 The Met Office has named Storm Arwen; the low-pressure system will bring high winds most of the UK.

An amber wind warning for northeast Scotland and England has been added to existing wider yellow warnings that are in place for Friday for Scotland, Northern Ireland and the west of England and Wales, as well as for much of the UK - except the southeast - on Saturday.

The amber warning will run from 15:00 on Friday to 09:00 on Saturday, with the strongest winds expected in coastal locations, where gusts in excess of 75mph are possible in some places.

As well as high winds and disruptive gales, Storm Arwen will bring snow to the high ground of Scotland and northern England and a yellow snow warning is in force for part of Scotland on Friday. Some sleet and snow is also possible over some lower ground in the UK later on Friday and Saturday, but this is likely to be more short-lived.

Storm Arwen, a name selected as part of the Name Our Storms collaboration with Irish forecasters Met Éireann and Dutch forecasters KNMI, is set to track slowly southwards across the North Sea on Friday, bringing severe gales to the northeast in particular, but potentially disruptive winds for much of the UK.

Met Office Principal Meteorologist Dan Suri said, “Storm Arwen is associated with a deep low pressure system that will impact the northeast in particular from Friday, but will also bring wider impacts to the UK with high winds, rain and some snow probable over the high ground.

“Storm Arwen’s impacts are mainly associated with high winds as the storm sinks southwards and will widely bring gusts of up to 65mph in coastal areas, although slightly stronger in the northeast, with in excess of 75mph possible in exposed locations.”

Storm Arwen brings with it the risk of disruption to travel, power cuts and potential damage, especially within the amber area and near the coasts, where large waves could see material thrown on to coastal roads, sea fronts and properties.

Following a track across the North Sea, Storm Arwen is expected to shift away into the continent later on Saturday, leaving a drier day for many on Sunday, barring some lingering showers over the eastern coasts of England and Scotland. Some wet weather will also move in to the far west later in the day, possibly preceded by some sleet and hill snow over Northern Ireland.