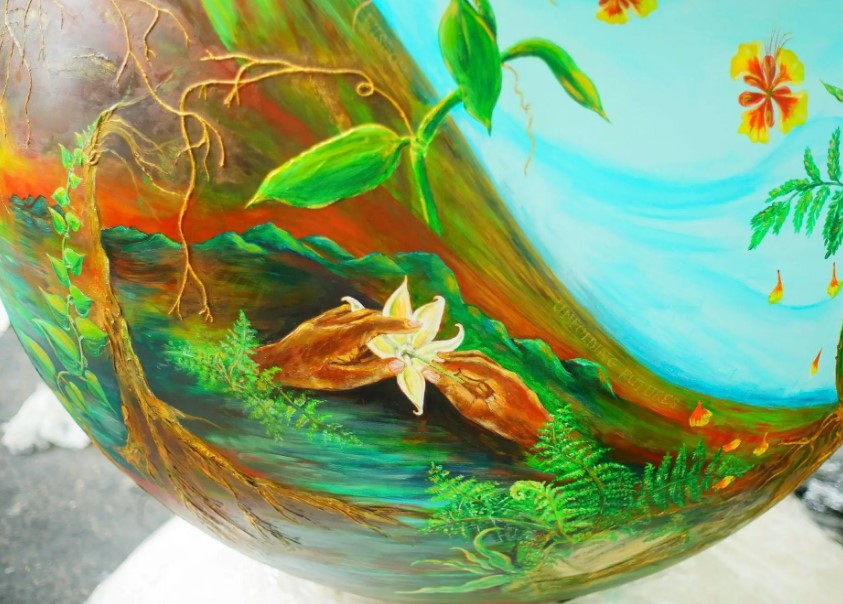 The artists creating the designs for the Liverpool City Region’s public art trail as part of The World Reimagined have now been announced.

The ten artists will create the designs for a series of ten large globe structures, creating a public trail that will bring to life the reality and impact of the Transatlantic Trade in Enslaved Africans and invite the public to engage with the dialogue and actions of making racial justice a reality.

There will be a walking trail of five large globes located in and around Liverpool city centre, with a further large globe in a prominent location in Halton, Knowsley, Sefton, St Helens and the Wirral, making up a longer, Liverpool City Region wide trail.

The project has been brought to the region by the Liverpool City Region Combined Authority, which is the main local sponsor and is co-ordinating all activity across the region’s six districts, working with its local authority partners.

The trail will be open from 13 August to 31 October and will provide an enjoyable and though-provoking learning experience for people of all ages.  The commissioned artists will create globes responding to the themes ranging from ‘Mother Africa’ and ‘The Reality of Being Enslaved’ to ‘Still We Rise’ and ‘Expanding Soul’.

Each globe will enable the public to experience, discover and be inspired by art as well as present the opportunity to be part of the discourse around racial justice and what it means to be British.

The Liverpool City Region is one of seven involved across the UK, along with Birmingham, Bristol, Leeds, Leicester, London, and Swansea.

There will be 103 globe sculptures across the seven cities and each trail will consist of 10 globes: one for each of the nine themes of the Journey of Discovery. The tenth Liverpool City Region globe will be designed by Amber Akauna, a Liverpool born Nigerian-German filmmaker working in cinema, art, and tv to document and explore Black culture, identity, and history, who is working in collaboration with community groups local to the trail.

“Our region has a long and storied past – and that hasn’t always fallen on the right side of history. Like many port cities across the world, our region played a shameful and prominent role in the transatlantic slave trade – a legacy that we’re still coming to terms with today.“While it’s uncomfortable to face up to the shadier parts of our past, it is imperative that we are transparent about every aspect of our history, even that parts of it that we aren’t proud of. History gives us an opportunity to learn, to reflect, and to remember the lessons and mistakes of the generations before us – and ensure that they are never repeated. “Our region’s diversity is one of our greatest strengths – it enhances our culture, enriches our lives, and makes our area one of the best places in the country to live and work. While we’ve come so far on our journey, it’s clear that there’s still a lot of work to be done to tackle racial inequality.“As a middle-aged white man, I know that it’s my job to listen, to learn, and to amplify the voices of our black, Asian and minority ethnic community. This is an opportunity to give a platform to more conversations around racial injustice and to show people in our communities that everyone has a part to play in the fight against discrimination. I want to ensure that we learn from the lessons of our past, to shape a better future for our city region – where no one is left behind.”

The trails are the centre of a broader learning and community programme – with schools, community groups, sporting, and cultural institutions from across the Liverpool City Region taking part. In addition to the larger globes more than 30 learning globes will be created.

“The World Reimagined is a hugely ambitious and thought-provoking project that will challenge us all to think about the legacy of our city region’s past and its continuing consequences today.  At the same time, it will be a celebration of creativity and I am sure that the artists announced today will create incredible artworks that will be a huge attraction for people from across our city region and beyond.  We should never underestimate the power of culture to challenge, entertain and educate.  I can’t wait for the project to open to the public in August.”

“Art has the unique ability to invite dialogue for us to collectively process, participate and reflect. Artists remind us who we are and help us to imagine who we can be. I am excited for the country to engage with these globes and am deeply grateful to have such incredibly talented, open and thoughtful artists involved.  They offer us multivariate angles from which to understand the Transatlantic Trade of Enslaved Africans, and its legacies. “I hope the power of this project will contribute to an equitable and inclusive pathway forward.”

“As I have looked at the many thoughtful entries, the enormous responsibility we have when releasing works that speak to a challenging subject into prominent public spaces, has hung over me. It is exciting that we are getting these artist’s work out into the world – literally on the streets. And while we should be sensitive to concerns, we should not shy away from having uncomfortable conversations that these Globes will undoubtedly provoke. Artists have always done this, and the artists we have chosen will now have the chance to become a part of this history.“I particularly hope that these Globe trails will be seen by younger people across the country – the younger eye is a lot more open. By gaining a better understanding of the true history of the Black world, our younger generations will be better equipped to create a shared future that is more equitable and open-ended.”

The World Reimagined will inspire and create a moment to open imaginations to new possibilities – instil pride in what it means to be Black and British. It will be one of the largest art education projects for racial justice the UK has seen, and the globe sculptures will play an integral role in helping people travel through this Journey of Discovery.